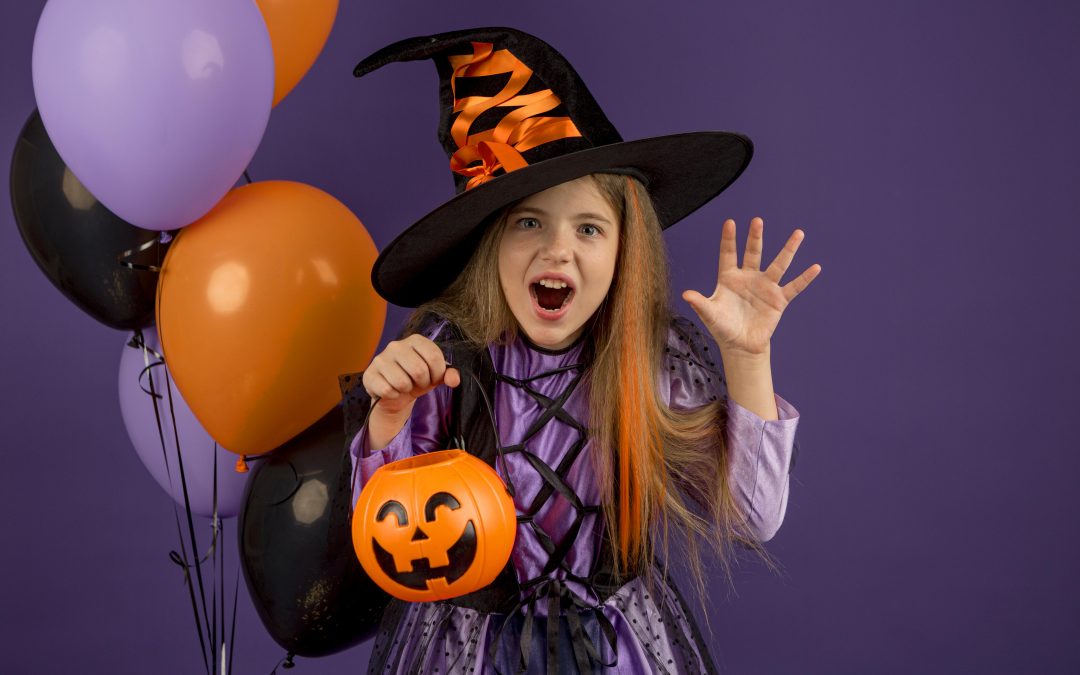 When we learn English at Hello Online School, it doesn’t have to be all about grammar, syntax and all the rather technical and, although important, potentially boring stuff. Learning English is as much about discovering the culture of the countries that speak the language as it is in studying the words.

One of the biggest festivals of the year is Halloween, which falls on October 31steach year. In this article we will look at some of the main Halloween idioms and Halloween vocabulary.

Huge in the USA, and growing in the United Kingdom,  costumes and goodies start appearing the shops from late summer – from spooky masks, the colour orange (which has grown to be the colour of Halloween) to chocolate spiders!

Before we look at some of the most common Halloween words, here’s a little history of the celebration. Halloween, or All Hallows Eve, is a festival which prays for the souls of those trapped in purgatory – the world between Heaven and Hell. Traditionally, children would hand out the ‘soul cakes’ their mother and grandmother had baked, to support the prayers for those in purgatory.

From this, we have developed the tradition of trick or treating. This is where groups of children pass from door to door seeking treats from their neighbours. The concept of a ‘trick’ to be played on non-participants is fortunately no longer practiced.

‘Treats’ are usually sweets or candy (the UK and US versions of the same confectionary). One way of knowing whether or not a particular household is participating in Halloween is to look for a lit pumpkin in their driveway. These large orange vegetables have grotesque(frightening looking and evil) faces carved into them, and candles shine through the eyes, noses and teeth.

Another way to learn Halloween idioms is to watch films. The most scary and frightening (but usually in a comic way) will feature some of the evil creatures associated with Halloween. Just to make sure that audiences are not confused, a whole series of horror (or frightening, scary) films exist under the name of ‘Halloween’.

Vampires are blood sucking people with large incisors who bite the necks of their victims and drain their blood.  In turn, these victims become vampires themselves.   But vampires are a little easy to get rid of; they cannot live in daytime and are allergic to sunlight andgarlic.  So taking one for a nice lunchtime meal of Chicken Kiev on the terrace of a sunny restaurant is sure to finish a vampire off.  If that doesn’t work, a wooden stake (a large, pointed wooden stick) through the heart does the trick as well.

Zombies, also known as the living dead, because that is what they are, are also everywhere on Halloween.  Get killed by a zombie, and before long your body will partially decay while your eyes turn hollow and green.

Ghosts (the spirit of the dead) of course feature heavily in Halloween vocabulary. Although many of the greatest ghost stories – ‘A Christmas Carol’ and ‘The Woman in White’ for example are set in pre-Halloween times, lots of films and merchandise in the shops feature these creatures.  And there are nearly as many different names for ghosts in English as there are types of white sheets and scary masks on the shelves of supermarkets at Halloween time. Apparitions, wraith, phantasm are some of the more unusual, while spectre, Doppelganger, spook, spirit and phantom are more common.

Witches, which are supernatural women able to cast spells over innocent people, but interestingly their male equivalent – warlocks – are much less common.

Many Halloween idioms have developed over time. Many of these phrases are used in every day conversation to illustrate a point. To have one’s blood run cold means to experience a frightening or disturbing event, and to create that unpleasant, shivery feeling and sense of our stomach falling that occurs when we have a shock. To dig one’s grave is a way of expressing that we have made a bad mistake. In cold blood is a way of expressing that an action, often a bad one, was carried with complete knowledge of the consequences. Like a bat out of hell is not just a hard rock hit by the singer Meatloaf, but means to move very quickly. Playing devil’s advocate means to present the other side of an argument even though you do not personally support it.

Skeleton staff is a minimal amount of workers needed, and to be stabbed in the back is to be betrayed by a friend or colleague.  This phrase most probably comes from Julius Caesar, a Shakespearean tragedy.  Indeed, the Bard (Shakespeare) was extremely fond of using the supernatural or spirit world in his works, most famously Macbeth, where witches dictate the murder of the king. In fact, Shakespeare was quite brave to pen that particular play, since it followed the Gunpowder Plot, where plotters sought to blow up Parliament and kill the king, and which followed just a few days after Halloween.

A witch hunt means to unfairly seek to damage others, perhaps because of a false view of their beliefs and at death’s door is a slightly sarcastic way of suggesting somebody is not as ill as they are making out.

Although some horror movies, such as The Exorcist or The Shining are genuinely scary, many take the idea of the supernatural and gently lampoon, or make fun, of it. An example of this can be seen in the ‘Scary Movie’ franchise. Similarly, The Addams Family set of films and TV programmes are entertaining for both children and adults. Plays such as The Woman in Black by Susan Hill and Leeches and Scream by Alan Peters take the Halloween style comedy to heart, although the first of these will certainly make you jump if you go to see it in London’s West End.

So Halloween is a light but popular feature of British and American culture; learning Halloween vocabulary and Halloween idioms can be both fun and a good way of expressing and understanding ideas in everyday conversation.